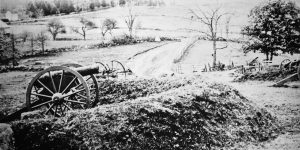 Previously in the novel: War Secretary Stanton holds the Lincolns captive under guard in the White House basement. Stanton selects Duff, an AWOL convict,to impersonate Lincoln. Duff learns how to conduct cabinet meetings. Alethia, the woman playing Mrs. Lincoln, has had a carriage accident. He goes to see her at the hospital in Maryland.