The old man held the yellowed newspaper page in his unsteady hands as tears trickled down his creased cheeks. Each day he stared at the photograph, a public record of his apartment building collapsing in an earthquake twenty years ago. He only saw the face of his son in the sky. Opening the desk drawer, he pulled out an old revolver, one his father had given him after the American troops arrived in Japan in 1945.
“They will kill you,” his father whispered in his ear. “They will violate your sister. Kill her and then yourself. Only way to save the family honor.” His father left them. The son heard one gunshot and his mother’s soft moan. A second shot, followed by an immediate, heavy thud, caused him to shudder.
A knock at the door interrupted his thoughts, bringing him back to the present He shuddered again.
“Papasan?” a young woman’s voice rang out. “Your meal is prepared, papasan.” After a pause she added, “Is everything all right, papasan? Are you sick?”
“No, I am not sick. I am not hungry. Go away.”
Listening to her feet shuffle away, he recalled his father’s admonition to save the family honor. With bowed his head he spoke the words never articulated before aloud.
“I have not saved the family honor,” the old man whispered his confession to himself. Not at the end of the second world war, not as he smiled and welcomed the conquering American soldiers, not even when he forgot the old ways and entered a new life of the shiny, glittering Japan born from the ashes. He gave permission for his sister to marry an American soldier and move to the United States. He pretended he had found honor in becoming a successful businessman in his new world.
Until the earthquake came.
His wife and daughter were away visiting relatives. He sat in his living room reading the newspaper as his young son slept in his bedroom. The first tremble was hardly noticeable. By the third, he felt the walls sway and the floor beneath his feet buckle. Without a second thought he dashed from his chair, tumbled down the stairs and scrambled up the street. When he crossed the trolley tracks he paused to twist his body around to watch the apartment building begin to collapse. Then he remembered his son slumbering in his bed.
The next day he opened the local newspaper to see himself frozen in the moment of looking back at the collapsing building. The photograph could not see his internal agony as he remembered his son was still inside. In an instant he looked up in the right hand corner of the photo and saw a face in the clouds. It was his son’s face, at the moment of his death looking down on his father.
No one ever blamed the man for his son’s death. He created a credible lie that he thought he had heard his son shout out to him, “I’m going to Sato’s house to play,” a full half hour before the earthquake began. It was only afterwards, he realized the boy had died in the rubble. Everyone, including his wife and daughter, comforted him in his grief. No one would ever know because no one else saw what he saw in the upper right hand corner of that photograph.
And now he lived in a spare bedroom of the comfortable home of his daughter and her husband. Each day, his brittle bones and atrophied muscles announced his impending death. He took the newspaper clipping out to scour the photo again. His son still stared back at him. His father still whispered in his ear, “Only one way to save the family honor.”
Again his daughter knocked at the door. “Papasan, please do us the honor of gracing the head of our table.”
He had no reply other than to put the barrel of the revolver in his mouth and slowly pull the trigger. 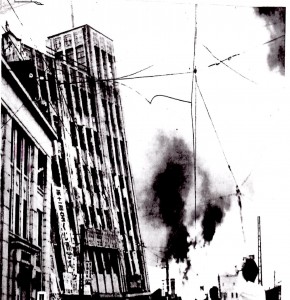 Can you find the face?

I always say I love being an old fart. Of course, that does come with one qualification—all those medical tests I have to endure to make sure some nasty disease isn’t trying to sneak up on me.
Recently I went in for my semi-annual blood pressure measurement, thumping on my chest and back, and breathing in through the nose and exhaling through the mouth. Yes, I was relieved to know I could still breathe. Then the doctor said it was time for another stool test and he started filling out the prescription sheet.
This confused me because I hadn’t had a school test in almost 50 years and I didn’t know why I needed to take one now. Before I could say anything I realized he said stool and not school and it wasn’t the kind of stool I sat on. Well, I could sit on it, but it would be rather uncomfortable, messy and stink.
He told me to go right over to the hospital to the outpatient care desk, hand the clerk the prescription, and the clerk would hand me the packet. I’d take it home, follow the instructions and return it to be analyzed. I am thoroughly versed on this procedure so not only did I hand in the prescription but also my insurance cards and driver’s license.
Of course, a line of other old people were in front of me, ready to get stuck, x-rayed and worse. The receptionist took my prescription and other required documents and told me to sit down and wait to be called. I made myself comfortable and was halfway through checking my Facebook account (I hate missing out on the latest cute kitty photo) when I heard my name being called. Sitting in the cubicle I filled out the paperwork, signing my name and initialing all the necessary boxes.
Up to this point I had dealt with volunteers and clerks trained in expediting paper, and they had all done their jobs amazingly well. Then the clerk handed the paperwork to someone who actually knew something about medicine. That person immediately recognized what procedure was ordered and knew I wasn’t going to be able to finish the test right then and there, on the premises at that exact moment. The clerk had to tear up the paperwork, take the prescription to the lab where a technician would surrender a plastic kit to be brought back to me. At a future undetermined date I would return the kit, a little less for wear, deliver it to the clerk who would then have me fill out the paperwork and afterwards deliver the plastic package to the lab.
I was not surprised. I had played this game before. Unfortunately, the medical staffer must have had a stressful morning up to that point and became a little confused about the situation.
“Does he have the sample with him?”
Several inappropriate and somewhat tasteless responses formed in my brain. I smiled at the clerk and said, “Thank me for not saying what first came to me.”
She smiled and said, “Thank you.”